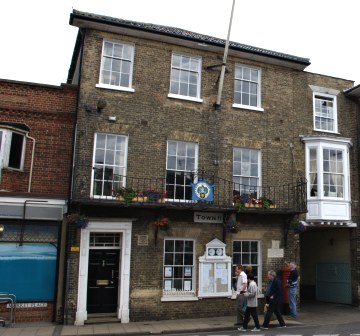 Walpole Old Chapel Once a farmhouse, this Grade II* listed building has a long history as a non-conformist meeting house, evidenced by its superb interior. Open to view on selected dates during summer months. Events programme. [ website ] 'Waverley' Pleasure Steamer Website for the famous last sea-going paddle steamer, now in charity ownership. As well as operating other UK trips and services, usually also sails from Southwold (either to London or on a local cruise). A wonderful experience. [ website ] Bad Behaviour In Wenhaston 1680 Historical researches by a Wenhaston Local History Recorder, Keith Johnceline. One of the Blythburgh History Notes on www.blythweb.co.uk . [ website ] Blythburgh Village Blythburgh is on the A12 near Southwold and Walberswick, with the landmark Holy Trinity church, beautifully floodlit at night. [ website ] Southwold Lighthouse Southwold's unmanned lighthouse is maintained by Trinity House. This is their webpage for Southwold. The Lighthouse is a waymark for passing shipping and a guide for those using Southwold Harbour.In the Lighthouse there are 98 steps up to the first floor, then a further 23 on up to the lookout. The lighthouse is often open to visitors - check the Blythweb Calendar www.blythweb.net/calendar [ website ] Road Accidents Involving Deer This area of Suffolk has its share of wild deer which can be seen on the fields or in Dunwich Forest. (Watch out for the increasingly common small Muntjac). Deer can though stray onto the roads and lanes with a resulting road traffic accident. This website link goes to an on-going research project which is collecting data nationwide on traffic accidents involving deer. Since the project began in 2003, tens of thousands of incidents have been recorded. [ website ] Suffolk Wildlife Trust With more than 60 nature reserves throughout Suffolk the Suffolk Wildlife Trust works to protect the County's wildlife. Local branch at Southwold. [ website ] RNLI Southwold Webpage Dedicated to saving lives at sea and funded almost entirely by donations, the Royal National Lifeboat Institution relies on volunteer crews to man lifeboats and provide a 24 hour service around the coast of the UK and Republic of Ireland. This is their page about the Southwold station (located at Southwold Harbour). [ website ] Southwold Railway The railway operated to Southwold from Halesworth 1879-1929, stopping at stations at Wenhaston, Blythburgh and Walberswick. This is the website for the enthusiastic Southwold Railway Trust, full of lots of information and interest. On-line shop. Their site at Steamworks, Blyth Road, Southwold is open to the public on selected dates. [ website ] Humphrey Jennings - A Genius Of The British Cinema Bill Barrett gives a short account of Walberswick-born Humphrey Jennings. [ website ] Friends Of East Suffolk Performing Arts (FESPA) FESPA is a registered Charity supporting and promoting the good health of the performing arts scene in East Suffolk. [ website ] The Pattman Family The story of a family and their connections with Blythburgh and Southwold through ale, sail and school. [ website ] Witness To The First Kennedy Tragedy An absorbing eye-witness account by Mick Muttitt of the aircraft crash in 1944 which claimed the life of Joe Kennedy Jnr. [ website ] Round Tower Churches This area certainly has some wonderful churches. An East Anglian speciality is the Round Tower church. Of the 42 of these in Suffolk several are in this area - for example Bramfield (where the tower is uniquely detached from the church - see www.bramfield.net), at Holton, Frostenden and also at Thorington, to name but a few. [ website ] Railway Connection To Southwold - The Story Pre 1879 Much has been written about the Southwold Railway, which operated 1879-1929 from Halesworth to Southwold with stations at Wenhaston, Blythburgh and Walberswick. Here, David Lee tells of pre-1879 attempts to establish a rail connection. [ website ] Southwold Pier Waterclock The origins and workings of Southwold Pier's waterclock explained by its creator (and local cartoonist, engineer, maybe-genius?) Tim Hunkin. [ website ] Black Shuck At Blythburgh In 1577 the evil dog Black Shuck is said to have terrified the congregation in Holy Trinity Church, Blythburgh, leaving death, destruction and claw marks in its wake. This item collates reports of phantom dogs throughout the UK. [ website ] Joe Kennedy Jnr's Last Mission More from Mick Muttitt about the tragic aircraft crash he witnessed in 1944. [ website ] Roadside Milestones The roadways of north-east Suffolk feature many old milestones, signs that these routes have been unchanged for centuries. This is the website of The Milestone Society and features a wealth of information about milestones nationwide. [ website ] Henham Hall - A Lost House The Henham Estate lies just north of Blythburgh and is nowadays famous for being the location of the summertime Latitude festival. Landscaped by Repton, but no large House remains to complement it. Alan Mackley here relates the story of Henham Hall. [ website ] The Wenhaston Millions Keith Johnceline's account of the 1930s fraud 'The Wenhaston Millions' involving a Major Crane and unsuspecting participants from Wenhaston and Blythburgh. The fraud was foiled following his marital interests in a lady from Southwold. [ website ] Tide Tables For Southwold Tidal information for Southwold, from the BBC [ website ]